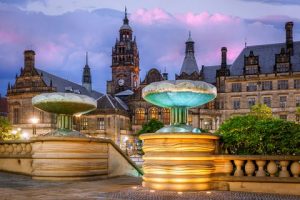 Sheffield lies in the North of England, about 65 kilometers north east of Manchester in South Yorkshire. Chartered as the City of Sheffield in 1893 due to its origins in a field on the River Sheaf. The population tops a half million citizens now, with a workforce over a million strong residing within an hours drive of the city. Sheffield’s fortunes have long been shaped by world events and external forces that forced the residents of Sheffield to adapt and innovate in order to survive.

Sheffield Castle was built after the Norman Conquest to oversee the local settlements in what is now the heart of the city. The market that grew around the Castle, in what is now Castle Square, made Sheffield a market town just prior to 1300 A.D. Over the next century, Sheffield became well known for the fine cutlery that was produced and sold there, and by 1600 the town was the known to be the center of Cutler Production in all of England, earning a mention in Chaucer’s “The Canterbury Tales”.

Sheffield was on the “cutting edge” so to speak of cutlery technology in those early years, and the invention and improvement of several processes in the mid 1700’s revolutionized metallurgy. Crucible Steel and silver plating placed Sheffield squarely in the lead in metallurgy in the world. Sheffield grew as an industrial center, and was a great producer of steel until a recession from the loss of import markets at the end of the 18th century. Conditions in the city deteriorated, and a cholera epidemic killed over 400 people in 1832. The huge amounts of wealth created by the large steel producers tended to stay at the top of the hierarchy, while the unchecked pollution, overcrowding, and disease made its way to the masses.

The start of the industrial revolution brought people back to the city over the next few decades, and clean drinking water was necessary to avoid the deadly diseases of 1832. New reservoirs built on the outskirts of the city helped keep the water supply disease free, but the collapse of a dam wall at one site in 1864 caused the Great Sheffield Flood, which resulted in the deaths of 270 people and widespread damage to the city.

The early 1900’s saw Sheffield again noted in literature as George Orwell called Sheffield the “Ugliest town in the Old World” in “The Road to Wigan Pier” written in 1937. The combination of quickly built slums to house the growing numbers of working people, and the pollution from the factories they manned made Sheffield a less than attractive city. The invention of stainless steel in 1913 by a Sheffield resident steel producer bolstered the industry, but at the cost of the beauty of the city founded at the confluence of five rivers in the hills. The hills around the city vary from 10 to 500 meters above sea level forming a natural amphitheater. By the end of the 1930’s a recession that paralleled “The Great Depression” in the U.S. had taken a toll on all industrial areas, and Sheffield was no exception.

That recession was soon over as European factories began gearing up for war. Sheffield quickly regained its spot as a world class steel producer, making weapons and ammunition for the coming World War. The very same industry that had made Sheffield prosperous during the good times, also made it perilous during the bad times. World War II made Sheffield a vital weapons and munitions manufacturing center, which in turn made it a target for Luftwaffe bombers. Three nights of air attacks known as the “Sheffield Blitz“, killed 660 and wounded another 1,500 residents. 40,000 others were left homeless by the air raids as 3,000 homes were demolished and another 3,000 severely damaged. All toll 78,000 homes were damaged to some degree.

After the war, Sheffield continued as a major player in the steel industry and screen print. Cutlery was still a big industry in Sheffield. Over half of the world’s surgical blades are produced in Sheffield to this day. Rebuilding the city after the war was a success, not only clearing the slums, but investing in infrastructure and park areas to beautify the city, and roads to get people to work at the steel mills. Sheffield was awash with prosperity during the years following World War II. Steel for reconstruction was needed all over Europe, Russia, Japan, the South Pacific and many other areas.

Rebuilding Industry in Germany, and Japan was a double edge sword, as the steel for their rebuilding meant busy steel mills around the world. The end result was that as industry labored to keep up rebuilding German and Japanese industry, it did not keep up with the manufacture of goods for everyday life. A bushel of wheat harvest would mean a dozen steel mills cluttering the hills in your neighborhood.

The late 1940’s and early 1950’s saw Steel mills that could not compete with the North Sea oil refineries close down throwing thousands into unemployment.